Howdy there! I have no new finished projects to share, but I do have several things I'm working on.

I started this blouse from Simplicity 2501: 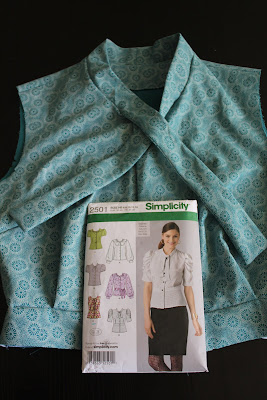 I'm sewing view D (the one modeled) but with the long sleeves from view A. You might recognize that I've already sewn view E (sort of): 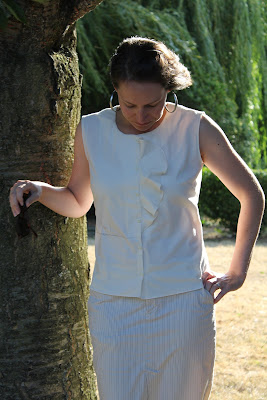 The fabric I'm using is a little stiff for this pattern though. It's a quilting cotton. I'm hoping it will soften over time.

I also just started a new knitting project: a sweater, for me. I should rename my blog The Selfish Craftster, but that one's pretty much been done. ;) 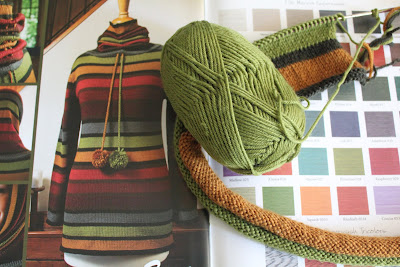 It's the Zara pattern from the now-defunct (I believe) Canadian yarn company, Mission Falls. This is the first time I've used their yarn, and while it is very soft and very pretty, there are a ton of splits in it. I had three splits in one row alone. It's pretty ridiculous. And unfortunately it's not just this ball or this color because I've used several different colors and had splits in all of them.

That's a major drawback and I think it would prevent me from purchasing this yarn again, if the company weren't already out of business. But I hope I'll be happy with the finished sweater. This is also the first time ever that I'm using the yarn specified for a project so I'm a little disappointed to find the yarn quality lacking.

For my next sewing class project I'll be learning how to make pants. The teacher asked me to pick a pattern and so I chose this one from Burda (the April 2011 magazine): 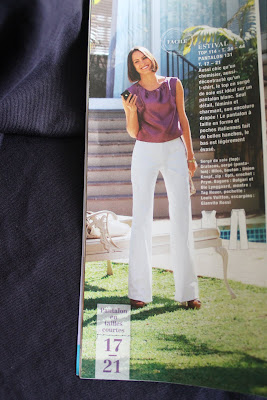 This is the first time I'll be using a pattern from Burda's magazine and I'm glad to have the extra help. I'll be sewing the same pattern as the white pants pictured, but in that blue twill you see in the photo.

In other news, I made a croquis. I think I made the whole process a lot more complicated than necessary. Finally my husband told me I should just put a piece of paper over my computer monitor and outline a photo of me that I had uploaded. I was trying to do everything digitally and failing miserably.

My husband took the photo for me but I think he angled the camera down and it makes me look shorter. Anyhow, here's my tracing: 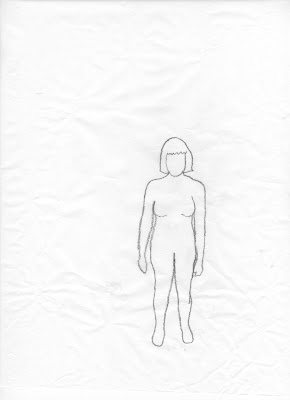 You can really see that I have very little waist definition (this is true) and that my shoulders are as wide as (or wider) than my hips. This is also true. I am of the reverse triangle or reverse pyramid body type.

I'm not sure what to do with the croquis now. I think I'll do like in The Wardrobe, Reimagined and I'll make copies of it and draw over it like a fashion plate. I was trying to draw over it digitally, and again, was spending a lot of time accomplishing nothing.

And last but not least, I finished my second Swedish horse napkin. Here's the two of them photographed side by side: 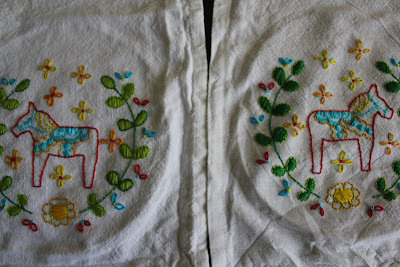 You can see I darkened the color of the leaves on the second one. You probably can't tell, but my French knots on the second piece are much better. I had looked at several tutorials and finally one clicked. I would love to give you the link but I'm not sure where I found it anymore! But I remember that she said to angle the needle up and away from the work when you wrap the thread - which is the opposite of what other people had said - and her way works best for me.

Anyhow, that's what I have on the boards. I'm not sure this is going to be a super productive week though. I woke up with pretty bad back pain on Sunday morning and I still have it. Oddly, the original place it hurt doesn't hurt as badly but now it's spread to the other side. I sewed a bit this morning and it definitely irritated my back. But knitting doesn't seem to affect it, so I might make more progress on that front. :)
Labels: croquis embroidery knitting pants shirt sweater