The name says it all!  I finished this t-shirt a couple of weeks ago and as per usual, haven't had time to take proper pictures.

So the kitchen mirror takes it again! 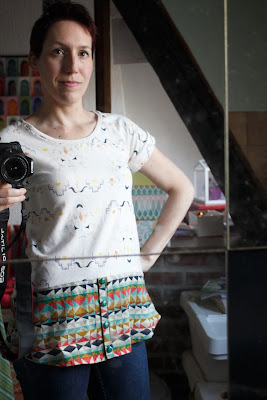 I combined two Southwestern style prints and I love the combination; it screams ME!!!

I had to raise the back join 6 cm because it absolutely fell in the worst possible spot on my body.  It worked from the front, but the back was just fugly.  I think chopping off those centimeters helped it though.  Here it is now from the back... 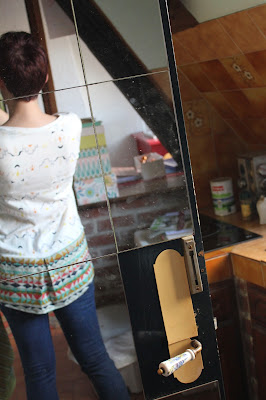 It's been a couple weeks so I've forgotten the small gripes I had with the pattern.  I think I didn't love how the sleeve bands were attached, just because you end up with a lot of fabric at that seam.  Other than that, the small things I don't like are because I don't have a twin needle or a serger.  I had to tack down the neckline in some places because it was wanting to roll outside.  A round of  twin-needle topstitching would've licked that problem I imagine.

This time around the knit fabric was heavier (and more stable) than when I made the dress pattern from Sew Caroline.  Thank goodness!!  That meant I didn't have to wrestle with it for hours like with the dress!!

Truth be told I've only worn it once so far.  It's been too hot for anything but tanktops!!  But I think I'll enjoy it in the future and it has quenched my thirst (a bit) for all things Southwestern. ;)
Labels: Sew Caroline southwestern t-shirt top