And then, based on my measurements, she showed me how to draft a straight skirt. I have to say, so far this drafting thing is pretty cool. It's all based on your measurements that you then plug in to formulas: math, wow! We'll see how it turns out at the end, if the skirt fits me better than a skirt I made using a commercial pattern. I can't imagine why it wouldn't, unless I stuff something up BIG TIME during the sewing process.

Here's what I have so far: 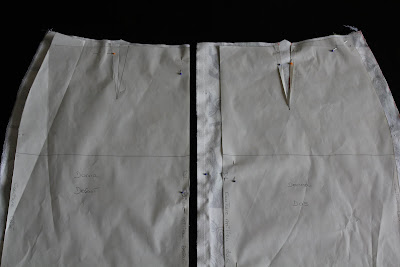 And here's the fabric I'm using: 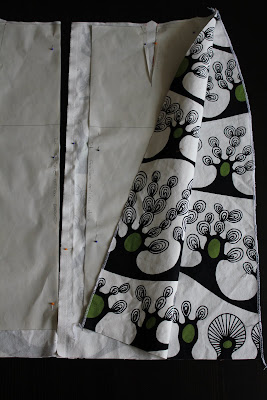 I originally had this Ikea fabric earmarked to go on the wall as decoration. But I've had it for over a year and still haven't built the frame, and it's the right weight for the skirt (I believe), so I changed its destiny, like that, with a snap of my fingers! ;) Plus I was too lazy pressed for time to go into town yesterday and buy more fabric for class.

You may have noticed that the edges of the side seams are serged. Yes, I used a serger for the first time last night. And now the serger is broken. But I swear it wasn't me! The teacher thinks there's something wrong with the motor. I didn't even use the machine for 5 minutes, I couldn't have possibly broken the motor, right...right? When she opened it up it was all full of fluff and stuff so I think it hasn't been serviced in a while.

Speaking of serging, I'm not convinced. I'm convinced that drafting is the way to go, but serging, not so much. Why buy (another) expensive machine that is (apparently) rather capricious and difficult to thread when there are plenty of other ways to finish a seam? Including ways that don't necessarily require special tools? I quite like French seams and Hong Kong seams and seams that are just treated with a little zig-zag stitch. And if you have pinking shears, why not just pink them?

Personally I love pinking my seams. Pink, pink, pink! Do people not like it 'cuz they think it makes the garment look less classy, more homemade? I guess I don't especially desire for my garments to look professional. I want them to look good, but I don't need to follow an industry standard because I'm not an industrial seamstress!

What are your thoughts on this?