I have several sewing projects in progress, as well as several knitting projects that are just waiting to have their seams sewn! And, on top of that, I've started working on crafting some Christmas gifts. I think it's safe to post my progress here because the destined recipients have no idea that I have a blog. :)

So, I decided to embroider some tea towels this year. I fell in love with these patterns at Polka and Bloom and I've started the Harvest pattern: 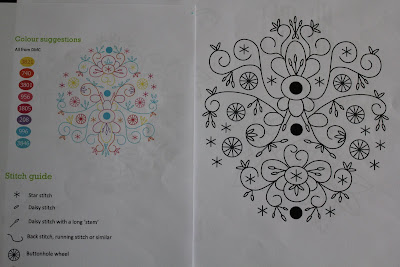 Mind you, normally I do cross-stitch with just a little embroidery, so my skills are not top-notch. Hopefully the tea towels will still look pretty, if a little rustic. Don't be fooled - I traced out the design in turquoise and there's some turquoise thread - but I'm not nearly as far along as it appears in this photo! 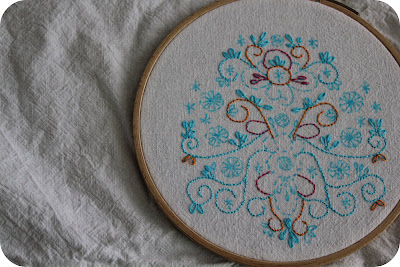 I placed the design in one corner so that if you fold the napkin in four, the design will be centered. I won't do this for all the napkins though; this one just happened to be the appropriate size for it. :) 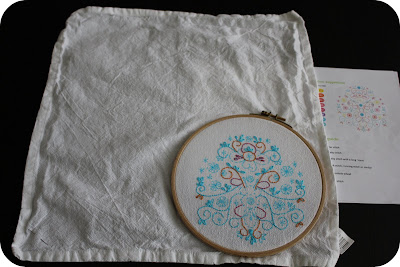 I have to say that I'm really enjoying the process. It doesn't require as much attention as knitting (and doesn't hurt my shoulder) and it's more portable than sewing. I was stitching away in bed last night.
Labels: Christmas crafts embroidery