The blog has been a little quiet recently but that doesn't mean I haven't been crafting. I was trying very hard to finish knitting a cardigan before classes started up again in September. Unfortunately, it's a bust.

I was nearly finished with a pattern by Véronik Avery: the Nordique Swing cardigan. I was using grey merino wool by Rowan and was very excited about how it was shaping up...until this happened: 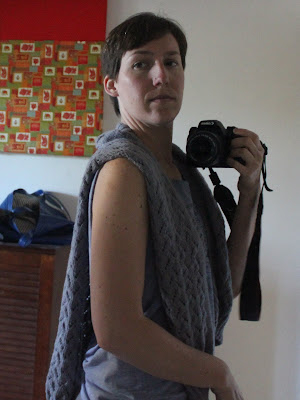 What is that bulbous thing behind my neck?? Let's look at it from another angle: 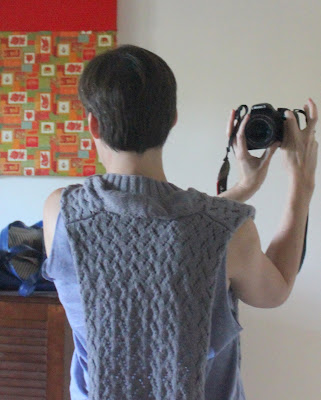 And here it is laying flat: 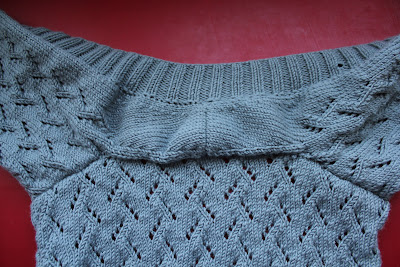 Um, yeah, that looks pretty bad. I followed the directions to the letter, so what happened? Well, let's look at the photo of the back in the magazine (Interweave Fall 2009): 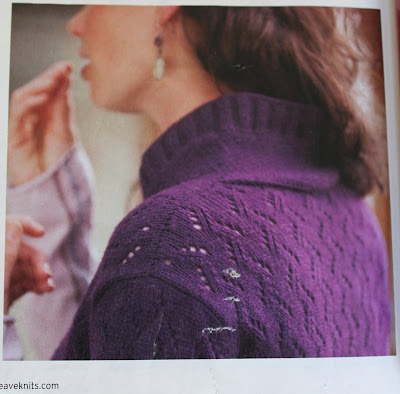 She's definitely got some funkiness going on at the back of the neck too. I had noticed this prior to starting the project but I figured it didn't look that bad. I should've known that if it was a little off in the supposed-to-be-perfect magazine spread, it was going to be super fugly in real life.

I wet-blocked the heck out of it, to no avail. And, on top of that problem, I also have this: 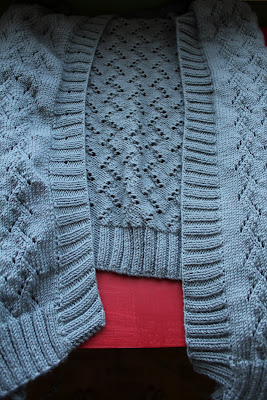 Clearly, that part is entirely my fault. I didn't pick up enough stitches to make the button placket ribbing and so it's curling like that. If it weren't for the horrible back neck problem, I would simply rip that part out and redo it. But I will never be okay with the neck.

I looked at knitters' completed projects of this pattern on Ravelry and I saw that some people had turned over the collar in the back, making the front have a shawl-collar effect. I tried to do this to deal with the bulge, but it wouldn't stay tucked under. And I want to be able to wear the cardigan and be happy with it without fiddling. So, it's joined the 'to-be-frogged' bag of shame.

This is the third project that I've tried with that grey yarn; I am beginning to wonder if it's cursed. Or perhaps I just need to listen to the yarn and let it tell me what it wants to be. The first project was the Natalia by Stefanie Japel, but I couldn't decipher her directions for the life of me. Then I tried to do a color work vest (waist coat) but the colors I had weren't working together. So then I chose the Nordique Swing cardigan and thought I had a winner at last, but alas, no.

You may be thinking that I'm depressed about frogging the cardigan after all the work I put into it, and I am bummed, but just take a look at another failed project: 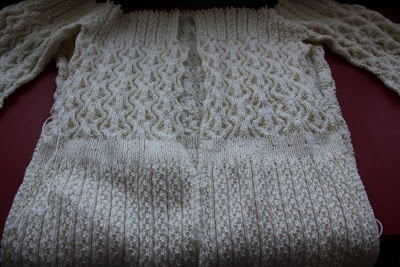 Look at all those tiny cables. I had knit all the way up to the collar, including the sleeves because you join them in the round to the body. And then I had a yarn discoloration disaster that I only saw after I had gone a couple inches above it. This was at the point where I had already been doing decreases for a while and there was no way I could find my place again if I ripped back.

Sigh. And look what I did here, smack in the middle of the front: why did I bind off a few stitches here?? 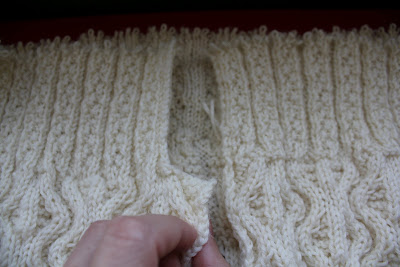 Apparently I mistook it for the armhole: 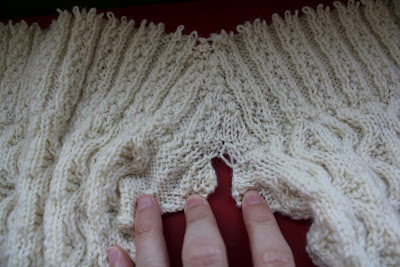 Here's what it was supposed to look like, gorgeous, non? 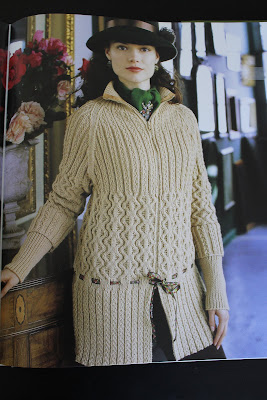 It's funny, I wrote at some point that I'm more comfortable with my knitting skills than with my sewing skills, but clearly I have some epic knitting failures. I think that I'm more accepting of a mediocre result in sewing than in knitting. I might work on a complicated sewing project for a month or two, but a complicated knitting project can easily take me a year to complete. And after all that time and effort I really want to love it. So, I prefer to undo something completely and use the yarn for another project rather than wear something I'm not happy with. Perhaps as I become more confident in my sewing skills I'll ask more of my sewing projects too!

Now I just need to find something that the grey yarn wants to become. I was hoping to make it into a cardigan because I need cardigans, but I think it might prefer being a pullover. Hmmm, any ideas?
Labels: failure knitting