I'm taking advantage of my summer vacation time to sew! Big surprise ;)  I have set myself a goal of completing six projects in three weeks.  So far I've finished 1 and 3/4 projects.  The last one is missing buttons but other than that it's finished.  I want to use clasps or frogs rather than buttons, so I will look to buy some this week.

I had made a list to help me organize my sewing time.  And of course the first completed project is not on the list!!  I decided to change dress patterns at the last minute, thinking I'd have enough fabric left over to be able to squeeze out a t-shirt.  Well that didn't happen; a t-shirt for a baby maybe!

But here is the finished dress, a red knit using an OOP pattern, Simplicity 1796:

This pattern is really more designed for woven fabrics, but on the fabric listing they do include "lightweight matte jerseys" as an option.  So I went for it.  The final result is not too bad but I should've gone down a size I think.

The instructions for the armhole finishing were really more adapted to a woven - it said to use store-bought bias tape.  So I made some bias tape with the red fabric, but I had some stretching on one of the armholes.  As a result it sticks out a bit.  It's the left-side facing in the image, as you can see.  I'll live with it, especially since summer around here lasts only two months, so I imagine I'll be wearing this with cardigans or jackets most of the time. 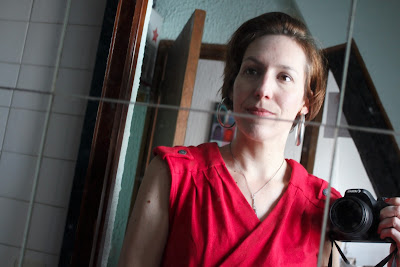 I also have some gaping with the front cross-over.  I had this problem the first time I made this dress too; apparently I didn't learn my lesson.  I should've overcrossed to compensate, but of course I didn't.  I will always wear a belt with this dress, so I can kinda tuck in the extra fabric into the fabric.  There's still some front gaping, however, so I need to wear a camisole to make it work-friendly.  No big deal. 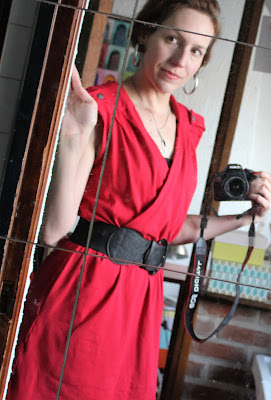 For this time around I made version F, with the hem length somewhere in between the long and short versions.  But this needs to be the last time I make this pattern!  It's not super super great and there are tons of other patterns out there!!

So next on my list to make is the Sew Caroline Downtown Tunic.  There are some really cute versions out there! I think I'm going to try some pattern mixing, cross your fingers for me! ;)
Labels: dress jersey Simplicity