What better reason to get back to blogging than the 10th anniversary of Me-Made-May!?!  My sewing machine has been packed away for the past two years.  I need to wipe off the dust and get her out and about again.

I have not been entirely without making, however.  Some knitting got accomplished.

And I moved houses, twice.  Here is my current set-up, with the obligatory adorable cat photo: 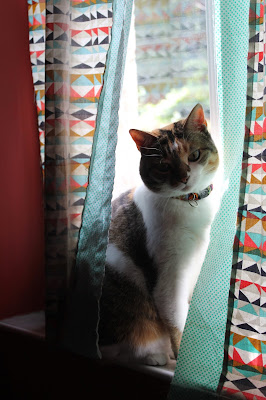 I don't have much me-made clothing left in my wardrobe, but I am trying to make it work, as is the point of the challenge!  And I want to use this as a catalyst to give myself permission to take the time to sew again.

In the meantime, here is a knitting project I am working on.  It's knit in-the-round and the body is finished, up to the point where I have to join the sleeves: 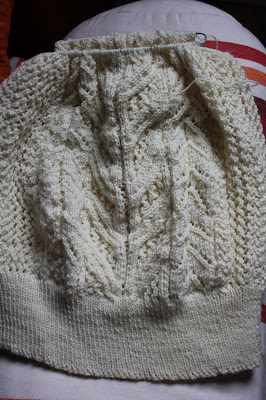 I have started one sleeve at least three times and here it is in its current state: 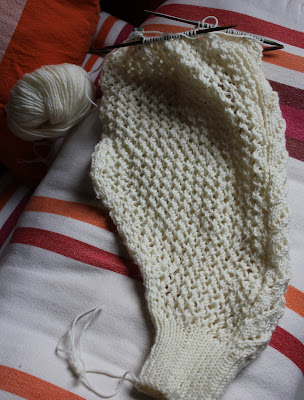 So, the shaping caused by the increases is a little too dramatic for my taste.  One of my friends said it makes the sweater look Nancy Reagan-ish; I admit that this is not the look I am going for.  So it seems like I am undoing this sleeve once again and trying to organize the increases differently.  Frankly I don't think it needs to be so large so I will probably eliminate half the increases and spread them out much more as I knit along.

The pattern is Midsummer Aran by Ginevra Martin.  The ravelry link is here.  It's from Interweave Summer 2013.

It's my first time knitting one of her patterns.  I had to redraw and rewrite the lace charts so that they made sense to me, but after that I was able to follow along well enough.  I have spent too much time on it to end up with floofy sleeves so I am biting the bullet!!

Anyhow, I am enjoying participating in Me-Made-May so far.  The sense of community always gives me a boost.  Glad to be back among you!